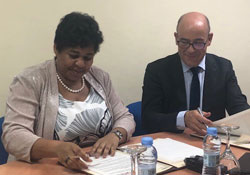 The Mountain Research Centre-Cape Verde (CIMO-CV) was officially created last Friday, November 23, in Praia, Cape Verde, by the Rector of the Cape Verde University, Judite Medina do Nascimento, and the President of the Polytechnic Institute of Bragança, Orlando Rodrigues, who signed the protocol for its establishment in the presence of the Portuguese Secretary of State of Science, Technology and Higher Education, João Sobrinho Teixeira, and the Coordinator of CIMO, Isabel Ferreira. The Minister of Education of Cape Verde, Maritza Rosabal Peña, and the Minister of Science, Technology and Higher Education of Portugal, Manuel Heitor, also signed a declaration of intentions to support the establishment and development of CIMO-CV.


CIMO-CV is an extension of CIMO, based in the Polytechnic Institute of Bragança, in Portugal, and it will be dedicated to research and innovation in agro food chains, from efficiency in agriculture production to the extraction of high added value natural ingredients based on Cape Verdean wild species, both land and marine.